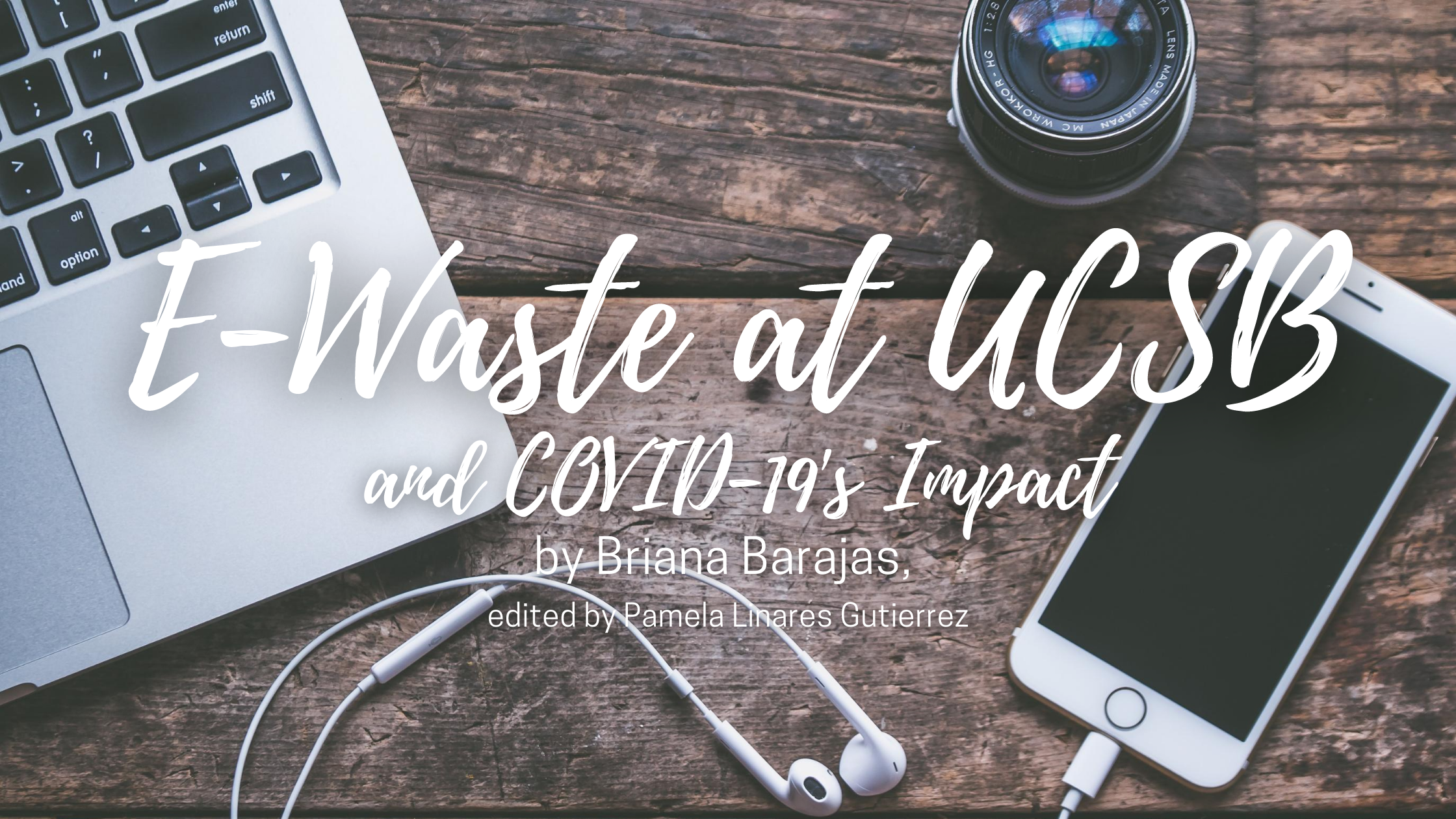 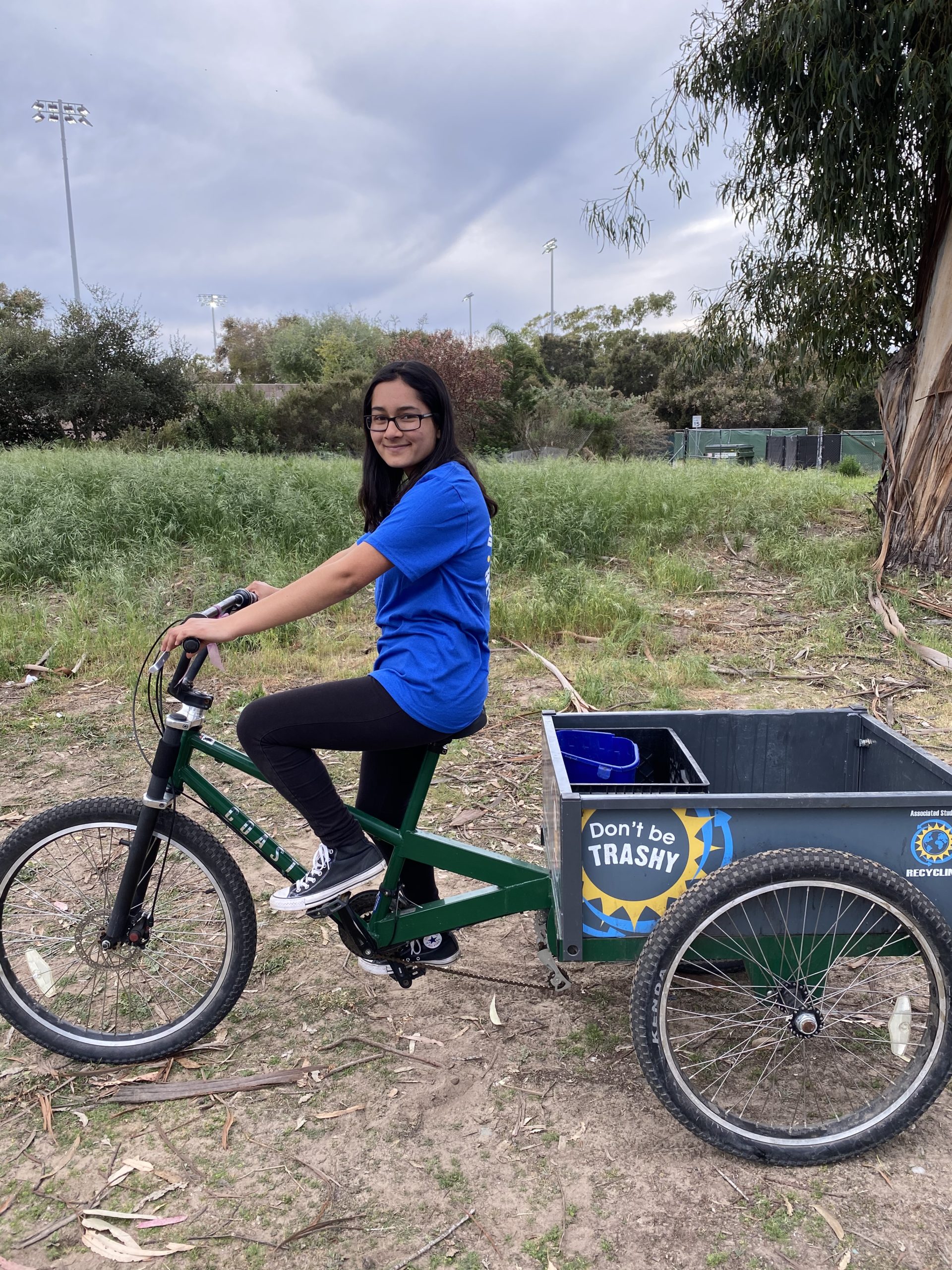 Briana is a 3rd year Zoology major with a minor in Chemistry, and she has been a valuable member of our team as a Route Rider since Winter ’20. While the ASR team went remote during Spring Quarter, Briana was working hard on researching e-waste on campus as well as COVID-19’s impact. The following educational opinion piece was written and researched entirely by Briana.

The rapidly evolving and innovative technology system has given us tools we couldn’t imagine, but it comes with one major drawback, e-waste. Every year, about 50 million tons of electronic waste are produced worldwide. Though recycling seems like a viable option, it usually isn’t done in a sustainable way. While a few plants recycle e-waste in a safe and environmentally conscious manner, most e-waste is recycled informally in developing countries, where it is cheaper. In these plants workers are rarely given proper protective equipment, despite the presence of chemicals such as lead, mercury, cadmium. Handling and burning of these toxins often leads to birth defects, nervous system complications, and unhealthy blood compositions. So why work in electronics recycling? In many cases, the workers are completely unaware of how their work negatively affects their health. Additionally, electronic waste can pollute the air, water, and soil, making it harder for these countries to depend on agriculture, so many workers turn to electronics as an alternative.

The campus evacuation in response to the COVID-19 pandemic was announced on March 14th, 2020. This led to a dramatic decrease in the amount of e-waste created during the 2019-2020 academic year. When including all months we see a 46% decrease in waste compared to last year, and an almost 50% decrease compared to 2017-18. However, during the 2017-18 school year 32.8% of e-waste was produced between March and June. Similarly, 27.2% of e-waste was produced during these months for the 2018-19 school year. This suggests a large amount of e-waste that was not produced due to the campus closure. Therefore, some of the following data excludes the months of March to June in order to portray certain trends more accurately. 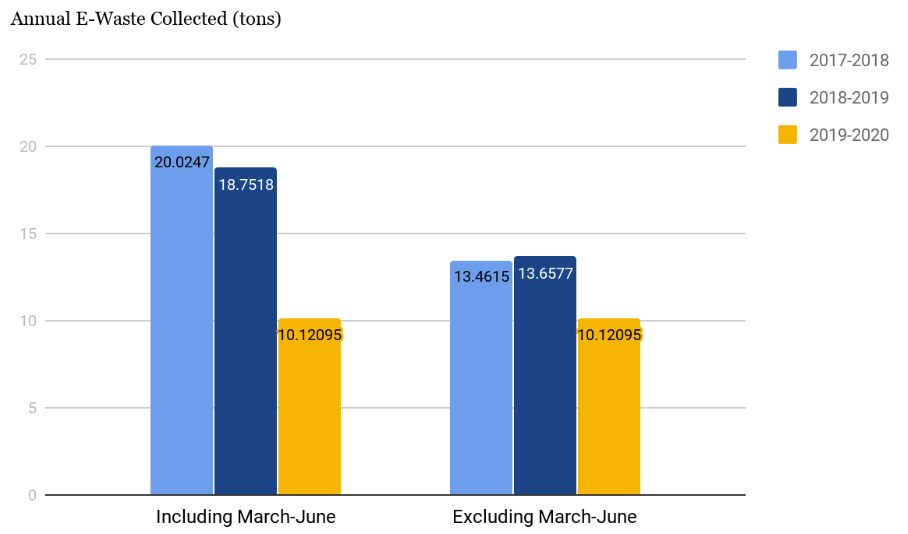 When comparing the 2017-18 academic year to 2018-29, it is more accurate to review the data that includes March through June. Using these values we see a 6.63% decrease in e-waste between these years. When comparing 2018-19 to 2019-20, it is more accurate to look at the data excluding the select months. Using this data, we see a 25.9% decrease in electronic waste for these academic years. Thus, we can see that COVID-19 caused a dramatic decrease in the tons of e-waste produced. However, even without the campus evacuation, the annual trends suggest the tons of e-waste produced this year were going to be less than the previous years.

The following are the months included within each quarter: 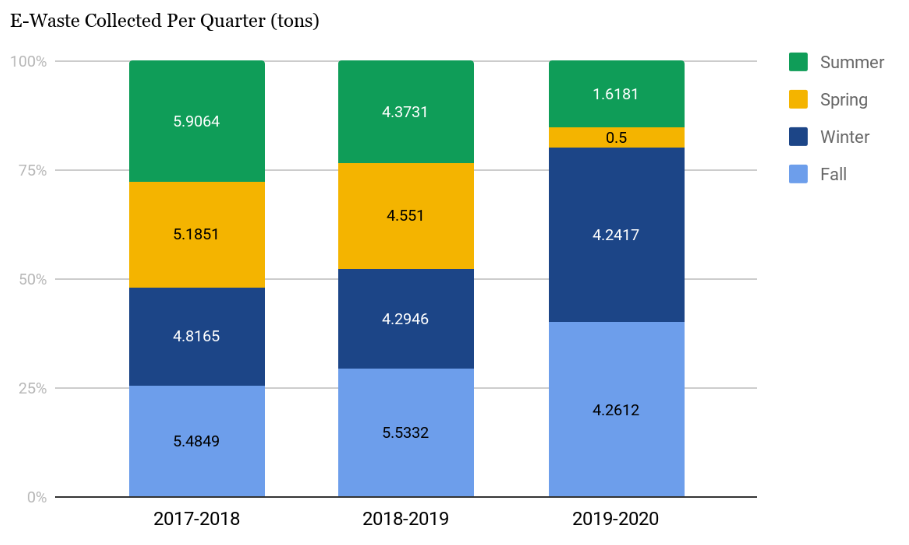 Half a ton (0.5) of e-waste was added to Spring of 2019-2020 in the graph above to improve the visual quality, but no e-waste was produced due to the campus closure.

The most electronic waste produced is usually during the summer or fall quarters, despite there being a smaller student population during summer. This is due to preparation for the new academic year, which often involves replacing older technology. Additionally, fall quarter has fewer holidays, meaning staff and students are on campus more frequently. Thus, it is unsurprising that the least amount of e-waste is produced during the winter quarter, which has the most holidays. The amount of e-waste produced winter of 2019-2020 appears high, but it is due to the campus evacuations. Additionally, labs and other organizations are less likely to replace electronics in the middle of the academic year, compared to the beginning or end.

Repair fairs are another great way to decrease electronic waste while also fostering the growth of an environmentally conscious community. These fairs bring together members of the community who are willing to help repair others belongings. Volunteers work one-on-one to teach people how to repair salvageable items. By bringing together people with various skills such as sewing, technology repair, and bike repair, we can decrease multiple types of waste. These fairs provide environmental benefits, and also benefit those in attendance. By attending repair fairs, you save money in the long run by decreasing the amount of things you purchase, while also learning a new skill. Before COVID-19, repair fairs were held occasionally on or near campus, particularly during the Zero Waste Festival. Keep up with us on Instagram to find out about any upcoming repair fairs once it’s safe to be back on campus!

Although art might not be for everyone, it is another great way to repurpose many different types of waste. Some of these artists are also creating businesses to create jobs for underprivileged groups. Here are a few artists who are using waste in their artwork: 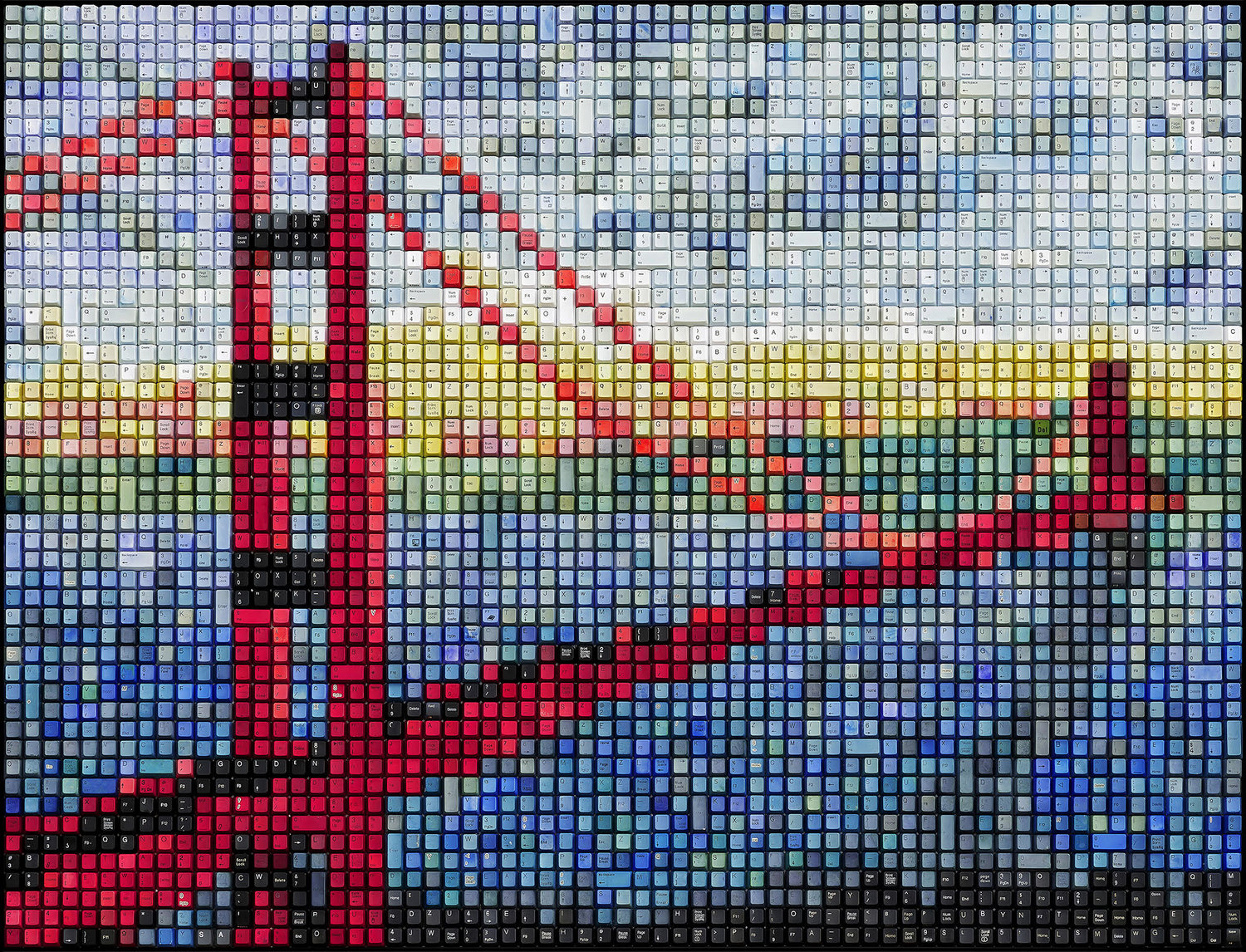 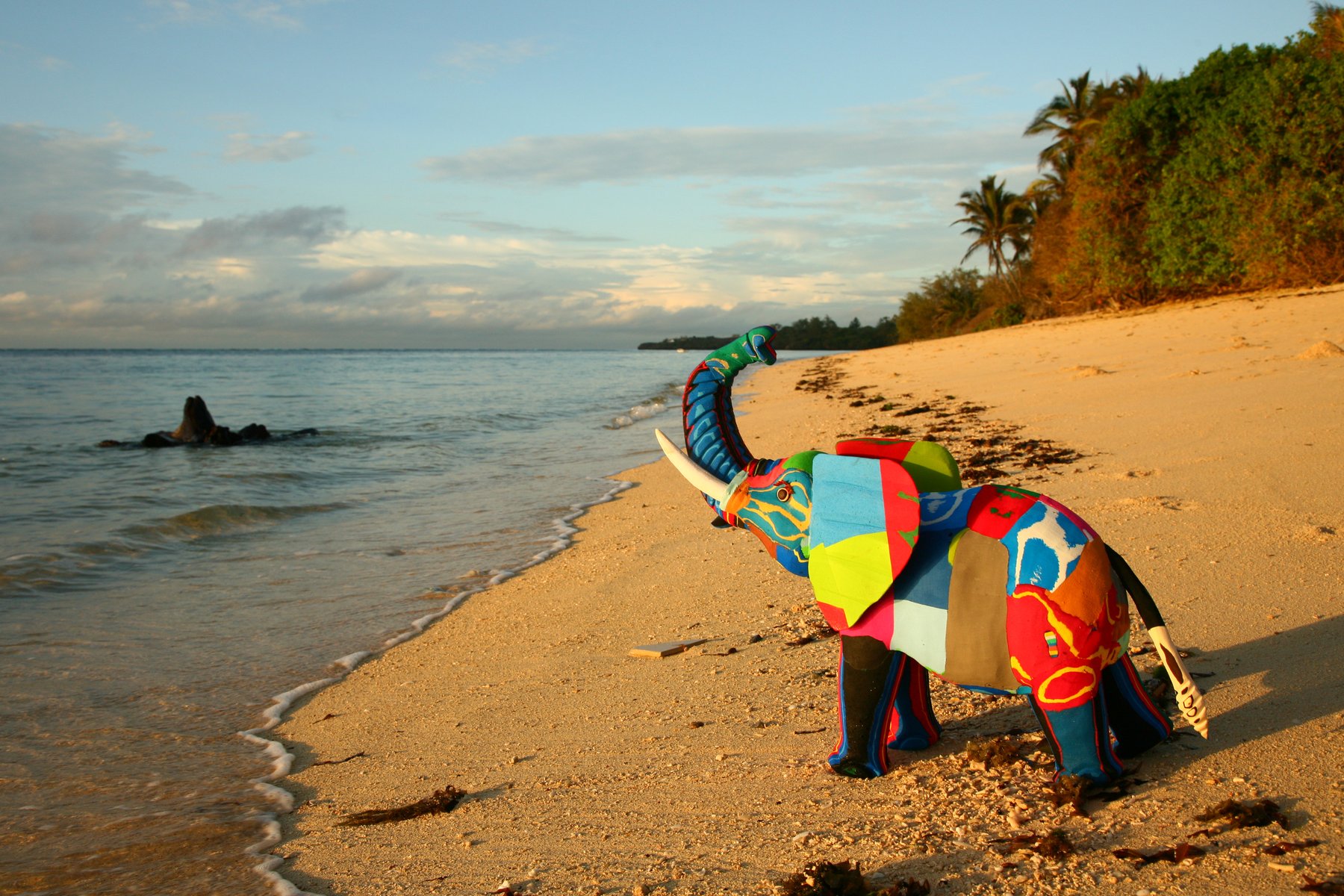 This shop “removes trash from the oceans, coastlines and makes art to support marine conservation, whilst creating employment opportunities in high-impact areas.” (Click the image to visit the shop’s website.) 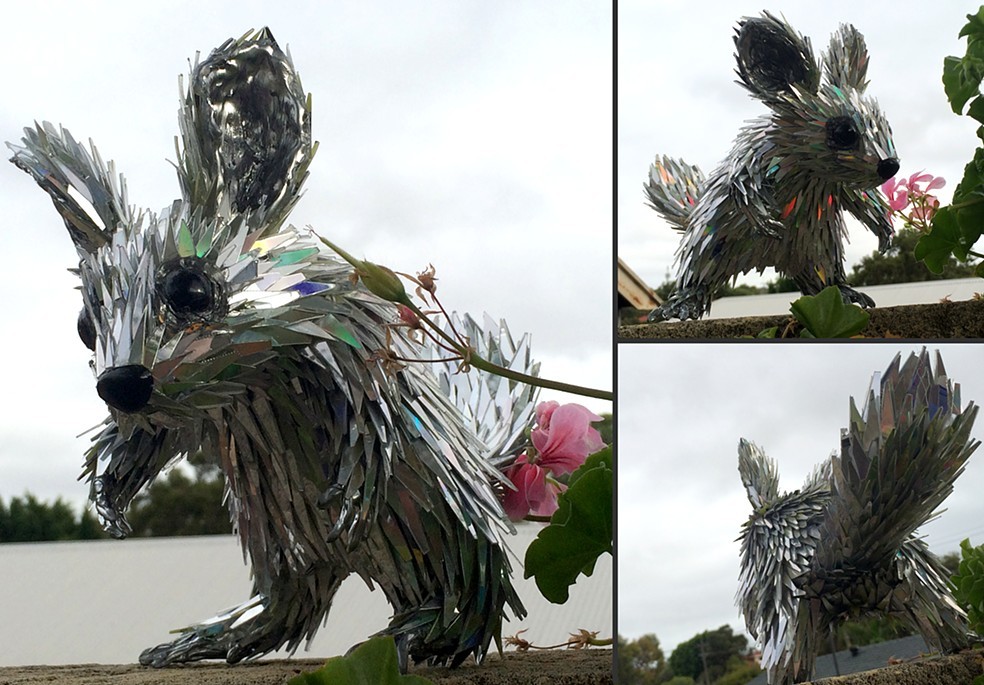 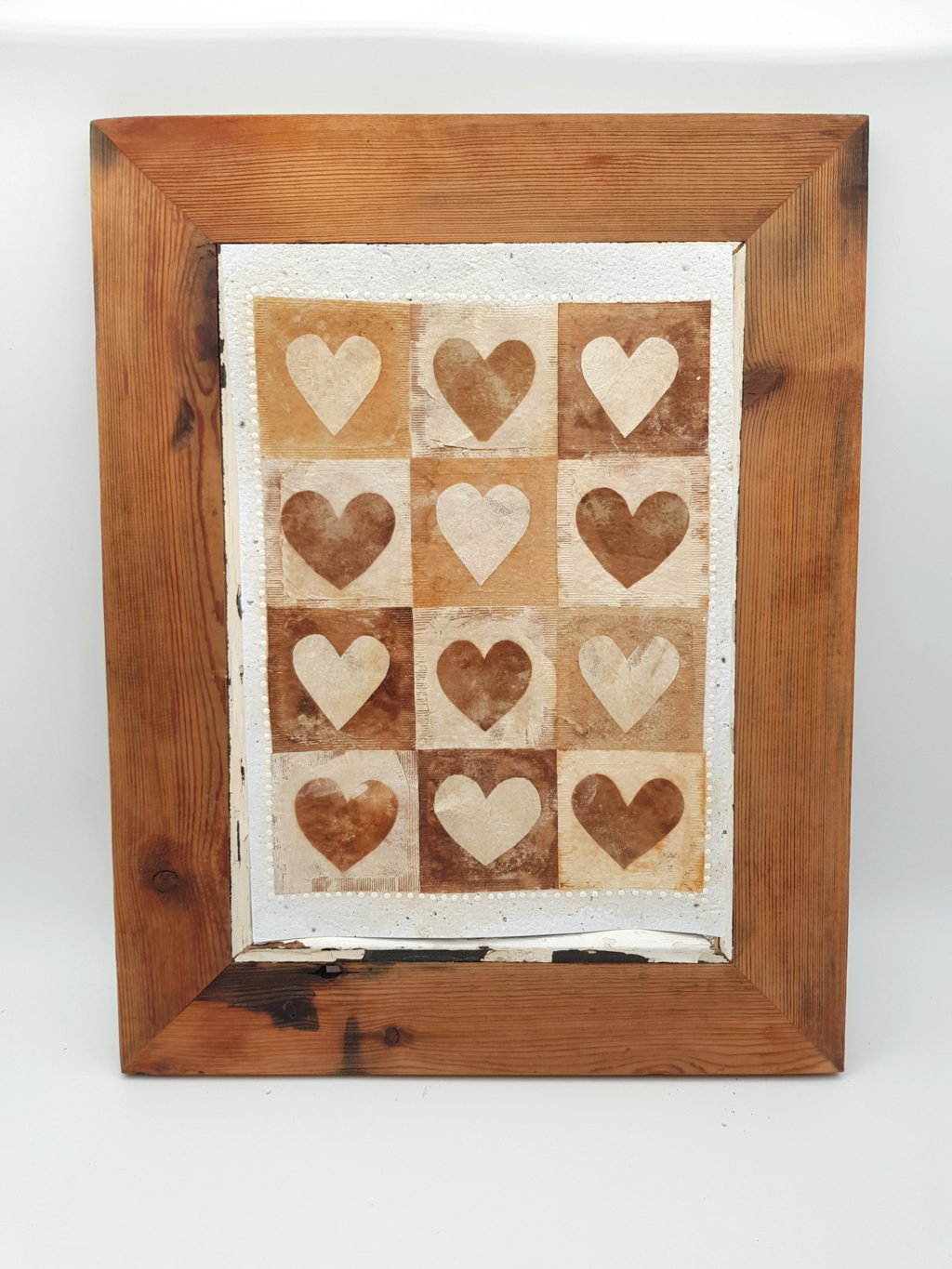 Although it is still in the works, many companies are looking for ways to create environmentally friendly technology. For example, researchers at Stanford created a flexible, biodegradable semiconductor. Similarly, a few companies gathered with researchers to create the Korvaa headphones. These headphones are made using yeast, fungi, and other microbes. By funding and supporting studies such as these, we can begin to move away from standard electronics.

Advocating for laws and regulations that promote environmental health is absolutely pivotal. This also includes fighting against individual corporations. For example, evidence suggests that companies such as Apple and Sony have intentionally made their technology harder to fix. This leads customers to replace electronics that could otherwise be easily repaired. Advocating does not strictly mean legal work and protests; it can also mean being more aware of what you purchase. By doing research and purchasing products from environmentally conscious companies, you prompt competitors to change their ways.